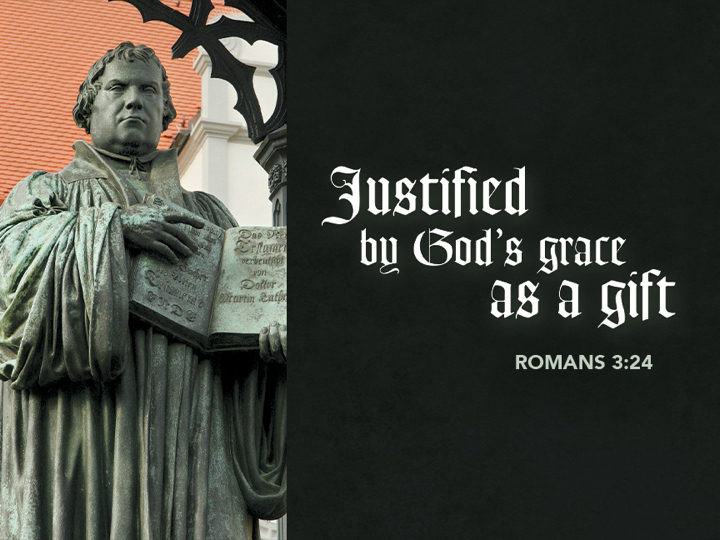 We are in the last week of October already and although the leaves are changing, the 82 degrees today was a surprise!  This Sunday is Reformation or Re-formation Sunday- a day when we celebrate our transformation, our new life that is continually evolving, in Christ! .  We will be singing a hymn beloved by many, “A mighty fortress is our God.” Did you know that Psalm 46 (which we will read on Sunday but is posted here for your own reflection) was the basis for Martin Luther’s iconic hymn?  What did Luther see in the psalm? How does it proclaim the trustworthiness of God?  What do you see in the Psalm?  How does it speak to you?  Sunday and Seasons shares "Psalm 46 proclaims: “God is our refuge and strength.” The God we know in the person of Jesus is the one we can turn to in times of crisis, the one we call upon in times of fear, the one we trust to pour out mercy and forgiveness upon us. This Jesus is our solid foundation. In a world of chaos, confusion, and change there is a constant: the enduring and life-giving grace of God."  Let us give thanks for this word of Scripture and reflect on it this week.

This Sunday is also the 5th Sunday in October so we will be having a 5th Sunday Blessing for our international brothers and sisters in Colorado Springs (the Afghan families being resettled by LFSRM) and in South Sudan (by supporting ELCA Missionary Wal Reat).  I have tried to share information about these ministries this month so hope you have a sense of what supporting them accomplishes.  We are hoping for one thousand dollars for this 5th Sunday blessing.  If you are planning on giving to this special offering by using the Tithely link at https://tithe.ly/give_new/www/#/tithely/give-one-time/1334741 please mark it as  the 5th Sunday October blessing.  Remember you can go to lfsrm.org to learn more about helping the Afghan refugees and Sharon Sorenson has placed links on Zion's Facebook page for Pastor Wal Reat's South Sudan mission.
Blessings to you this evening and week.  In Christ, Pastor Andrea
This week (other meetings/gatherings/work will be taking place as well but here are some things to note):
Prayer List: It is a privilege to pray for one another and to bring those who need healing to Jesus.  The prayer list has been updated, as we periodically do. Send prayer requests to Carol Smith at csmith2621@gmail.com or 412-477-7531.
"May the God of hope fill you with all joy and peace as you trust in him, so that you may overflow with hope by the power of the Holy Spirit." (Romans 15:13) Hope is trusting in God's promises- that He will never leave us and He loves us and knows our needs. In prayer, we ask in His name: Comfort for those in mourning, including the families and friends of Manei Serafini; Amy Estes; Steph Romero; Robin Sanchez; Kenny Chase; Bob Gonzales; and Rich Samora. We pray for and surround with Gods' healing touch: Sharon Sorenson having surgery Wednesday; Mike Blackmore hospitalized at Parkview; Pastor Andrea; Carol Schulzkump; JoAnn's sister Beth and Deena Karspeck; Floyd Gumke; Wilmae and Sherry Gartside; Linda Bounds; Lisa's mother; Anthony Campbell; Liz McKethen; Kimberly Ehrman; Katy and Brent Kapling; Loren Eigenberg; the Sandstead family.  We surround with prayers others battling cancer, including Norine's stepdaughter Sherry; Joni's nephew Mike; Jo Moss' cousin Virginia; Kimber Begano; Glenn Davis; Dr. Mark Jacobson; Linda Theige's BIL Pastor Bob; Elaine's nephew Carlos Trujillo; and Max Phillips.  We also pray for those affected by COVID-19.  Our prayers continue for Wal Reat (missionary in Sudan whom we support financially through Global Missions); Pastor Clay and The Way ministry; ACTS ministry; and the prison congregation New Beginnings and Pastor Schjang.
Other announcements/dates to put on your calendar:
Yesterday's worship service can be viewed by following this link: https://us02web.zoom.us/rec/share/fKBYYQ3ko2m093twfU8TeWbacaS5idVkb-tu71oUB7srFp5reGp052SWY2KO_HaX.vv1Y5WxkdPTz2HYD Passcode: KfN4$9*q
1.  Women's Bible study will meet next on Friday, November 5 at 9:30 am, beginning an Advent study on "O Come, O Come, Emmanuel", by Lifeway Women. It takes four of the hymn's verses and explores their meaning in a deeper understanding as we prepare for the Lord's first and second coming. There are 5 days of personal study to be done before each session, so order your book now and join us!  All are welcome.The sessions will be both in person and on Zoom.   The Zoom link is https://us02web.zoom.us/j/82692013940?pwd=dHB4S2N2VW9XZmNORmhRa3l0VGxSUT09 or join by phone 301-715-8592; Meeting ID: 826 9201 394; Passcode: 624229
2.  The Sunday morning bible study has concluded the Habbakuk study and will begin a new study on November 7th using the book "The God Who Sees" by Karen Gonzalez.  Using the stories from scripture about Hagar, Joseph, Ruth and Jesus we will consider those who have fled their homelands.  It might help us to understand the journey our Afghan families have had to take and encourage us as we consider partnering with LFSRM in resettling them.  I just purchased the book and think it would be great to read along with the bible study but come and participate in the study & discussion.  4 Sundays in November.
3.  We are back worshipping indoors and Jeff Smith is heading up our security team.  We need a few more members to assist so if you would consider this and call Jeff at 412-916-1826.
4.  To learn more about helping the Afghan families via LFSRM, there is another opportunity on November 2 or 4!  Go to this link to learn more:  https://www.lfsrm.org/event/refugee-volunteer-orientation-colorado-springs-online-3/?instance_id=3582  "This is the first step to volunteering with our refugee programs. During this session you will learn about the current refugee situation, what it takes to get involved, the application process, and about advocacy. We strive to stand in solidarity with refugees using patience, resilience, and compassion."
5.  A BOOK DISCUSSION will take place via ZOOM on Saturday, November 20th at 10 am on  "The God Who Sees" by Karen Gonzalez.  The Rocky Mt Synod AMMPARPO group will be leading this and we can join in!  Zoom Link - https://us02web.zoom.us/j/88514349858. Maybe we can meet at church and participate together-- a book club!
6.  Our friend Peter Severson serves as the director of advocacy for Colorado for the Rocky Mt Synod and has created a voter guide which is available at https://www.rmselca.org/sites/rmselca.org/files/resources/2021_voter_guide.pdf
7.  Paula Little is sponsoring an art day for Veterns!  Spread the news!  "Free the Mind" Painting from the Subconscious for the Vets is Sat. Nov 6. 10am-1pm in the fellowship hall.   RSVP to Paula Little

Over the centuries, Lutherans have kept a special day to thank God for the freedom that the word of God grants to believers and to pray that with the help of God’s Spirit, the church will be continually reformed and renewed. You are invited to worship with us on this Reformation Sunday, in praise and petition to God for the ongoing health of the church.

The Readings in the Bible

John 8:31-36
Written perhaps in the late first century, the Gospel of John is a two-part theological proclamation of Jesus as the Word of God, the incarnation of God, and the divine I Am, whose glory is shown forth at the crucifixion. John 8 is in the first part, the Book of Signs, in which Jesus enacts seven miraculous signs that manifest his divinity. Speaking in characteristic Johannine fashion, in this excerpt Jesus delivers a poetic, almost philosophical statement about his identity, the word he embodies, and the life he offers believers. The perennial search for human freedom, in Jesus’ historical context also political freedom, is illumined with the imagery of a slave and a son. It is not clear what the evangelist means when the Jews claim never to have been slaves: perhaps it is a theological statement. Recall that Pilate asks what “truth” is (18:38) and that in 14:6, Jesus calls himself “the truth.” For John, Jesus is the word, the truth, the son.
Jeremiah 31:31-34
About 600 bce, much of the Middle East was at war. Nebuchadnezzar deported many Jews to Babylon and in 587 sacked Jerusalem and the temple. Thus, during Jeremiah’s lifetime, the monarchy, the city, and the temple were destroyed. Like other Old Testament prophets, Jeremiah believed that these disasters were divine punishments, and his oracles called the people to hear and obey the word of God. In chapters 26–45, Baruch added biographical information about Jeremiah. Since it appeared that the old covenant had been obliterated, the Lord promises a new covenant, with forgiveness and the knowledge of God for the people.
Romans 3:19-28
Probably written in 57 ce, the letter to the Romans includes the fullest extant essay of Paul’s theology: that through Christ God has freed us from the power of sin and gives us the Spirit to live the way of salvation. The appointed excerpt is replete with Pauline vocabulary: law, justification, sin, righteousness, faith, grace, redemption, atonement. Verse 28 proclaims the Reformation emphasis on faith in Christ rather than works of the law. Paul’s especially negative reaction to Jewish Torah contrasts with the understanding of devout Jews today who see the law as a divine gift that lays out the good way to live in community.

Jun 26
Third Sunday After Pentecost: No Turning Back