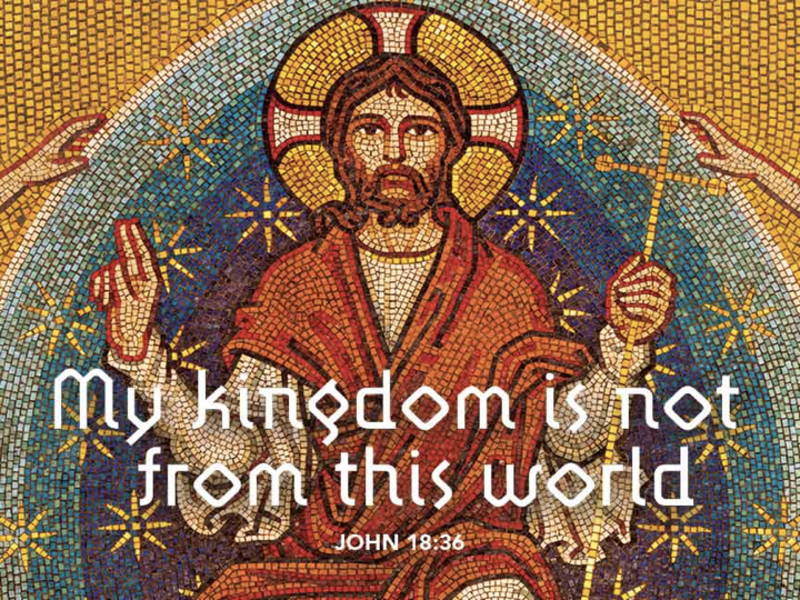 “Grace to you and peace from him who is and who was and who is to come”It’s great to be back with you after having eight days with my Benedictine Sisters and female clergy at the Our Lady of Grace Monastery where I was blessed to have a time of prayer, renewal, and learning!

As I wrote in Mondays E-formation, to pattern one’s whole day around gathering together in the chapel for prayer at 8, noon and 5 is a countercultural decision—you eat and work between praying—not pray if you have time between all the tasks of daily life and work.  I always find it a really good reminder that we followers of Jesus ARE supposed to be living and doing things a little differently than those around us who are not disciples of Jesus.

While I was there, I also thought ahead to gathering with you all today on the last Sunday of the church year:  Christ the King Sunday, and so when an email titled KING RICHARD movie premiere hit my inbox, it really caught my attention.    I haven’t been anticipating this movie but others have, including a black clergy woman retreating with me.  King Richard is based on the true story of a father, played by Will Smith, who raises two very gifted athletes: famous tennis sisters Venus and Serena Williams.

Now I haven’t seen it yet but it I have been told that one’s opinion of Richard Williams seems to depend on the community you hail from --- the white community sees him one way (domineering, aggressive, forcefully driving his daughter’s success) while the black community sees it another way (a black Dad working tirelessly for his daughters’ futures).   That is according to Pastor Dedra.

Well, our discussion about King Richard got me thinking….  about King Jesus because I believe that one’s opinion of him also varies depending on what community one is from.  Ancient people of faith looked for a powerful leader that would right their underdog national status and their suffering as a people.  They longed for Daniel’s vision of a king that all people, nations, and languages served.  Or the Psalms Lord: strong and mighty.  But right from the start, 2000 years ago, the powers that be (both the religious and political) saw him one way, as did most people honestly, while his followers saw him differently, even if for them it was a struggle at times....

Let’s look at our text from John where Pilate as the Roman representative interrogates Jesus before his crucifixion.  Pilate is acting as the local head of state who per historical records was a ruthless leader:  he is no innocent inquirer!  Pilate wants to act as though he is innocent of his prejudiced notions about Jesus, while playing along with the lies and corruption of his constituents writes Pastor Samuel Cruz.

Jesus does not fall for that; he instead, says Cruz, unmasks the demonic forces of his society that engage in such egregious abuse of power.Jesus tells Pilate, “My kingdom is not of this world!” Many have interpreted this to mean that Jesus’ kingdom is somewhere in heaven and not relevant to this world. To Cruz and others, including myself, Jesus is saying that the values of his kingdom are different from those of the current system.

Jesus does not have to exercise the type of authority that seeks to be on top, which results in oppression, corruption of the judicial system, and precisely the kind of hypocrisy that Pilate exhibited in the interaction between him and Jesus. Jesus is THE king, yet he does not arrive in a chariot, but on a donkey! Jesus is a king who is killed by those with societal power, not a king who is victorious over his enemies by defeating them in war.

The church, which purports to—and should—represent Jesus’ kingdom, is here to serve in humility, like Jesus, rather than to seek earthly power. Our King allowed himself to be killed and physically defeated, and in so doing, he engages in the ultimate demonstration of the power of love. Today’s gospel lesson leads us toward the cross and should remind us that, in the words of theologian Jürgen Moltmann, our Christian faith has a God that was crucified.

So today, in scripture and songs, we are reminded that we have a king, but we serve a king like no other—a king who is unlike every other early king that has been or will be:  a king who is not seeking power and glory, but humble service to others. And because of that, we who identify as the Church should also seek to engage in humble service to others. Everyone interested in seeking the truth, following God, has to embrace the values of this other kingdom, which contrasts sharply with a society that attempts to win at all costs. Today also offers an opportunity for the church to assess its values and evaluate how it operates in our society. This can lead to a clarification of mission and point us in the direction Jesus intends for us, so that we may truly be the real church that our world so desperately needs.

So, let’s take a few moments to reflect on and dream about our next year.  It’s a ritual many do at the beginning of New Year, so let’s dream as the church calendar turns to a new year.  Because Christ is our King, and this Kingdom’s values are NOT of this world’s, What future do we imagine? What’s next? Where are we headed? Christ reigns and will reign but LITERALLY, what does this mean for us?  What does it mean for life in a society and this world, where so often selfishness and death appear to hold the better hand?

What is your vision for your and OUR future discipleship?   I have to share a few of my thoughts:  wouldn’t it be amazing if everyone we encountered experienced LOVE, the all-encompassing welcoming healing love of God through us?  IF people encountered us thinking “there really is something different about her/him” and that something is Jesus Christ, our King, and they are able to name that because they are fully known and LOVED!  Wouldn’t it be also amazing if all people were able to love themselves because God loves them?  Self-hatred or hatred of the other is the cause of so much suffering in our world and love changes that!

OR how about If our service to others seeks to compassionately feed our neighbors while working to really alleviate their hunger.  OR If our service to this global home of ours seeks to care for her NOW while also working to stop her death.  If our service to the refugees and immigrants is such a service of love that fewer people globally flee their homes because violence and poverty is reduced!  What if in everything we do we act from a place of abundance not scarcity, and in every relationship, people are loved fully?

I started by suggesting that our opinion of Jesus, his reign, and therefore how we are to embody those kingdom values should be different than those who do not follow Jesus.  Would the actions I mentioned or you dream of not be living with Jesus’ kingdom values?  We get to be a part of God’s reign here on earth, NOW, while we await the eventual return someday of Jesus Christ!  But Christ is here already!  His rule governs our lives NOW so we are to live in HOPE, expectantly and responsively, seeking and doing the work of Christ in our daily lives and time.  As someone said “with our eyes fixed on the future and our hands active in the present.”

SO, I Invite to consider just one tangible way how you and I can live our Kings values more fully, as agents of Christ, the humble King, in all that we do with all that we are!  Amen!