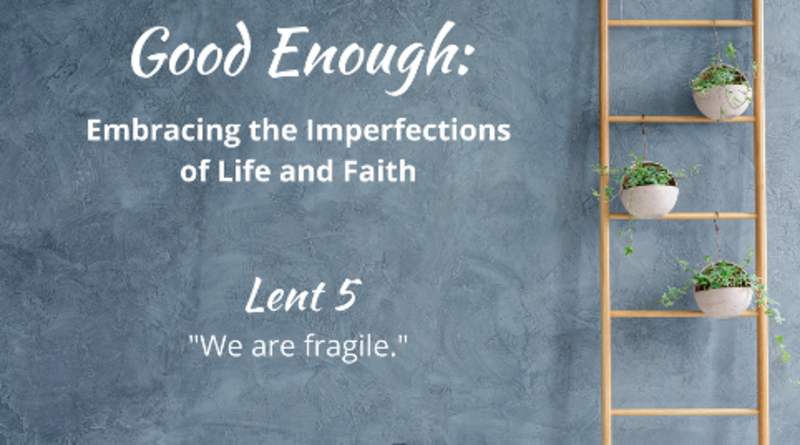 Lent is a time when we focus on death — obviously Jesus’, but also our own and those of our loved ones, but it’s not for any morbid reason.  It’s so we can focus on life, the preciousness of it, the beauty of our relationships, the gift of each person, and each new day. I was listening to another podcast this week — this time Brene Brown was talking with author Susan Cain and they started talking about  Laura Carstensen’s research about the psychology of older people.

We have this myth of them having a very terrible time of it, and obviously, old age presents all kinds of challenges, but she has found that the elderly tend to be happier and more full of gratitude, more invested in deep relationships, less prone to anger, more prone to states of well-being.

She says it’s not that, as we might think, that once you get older, you’ve acquired all this wisdom from all the years that you’ve lived. She says it has nothing to do with that. It only has to do with the fact that when you’re older, you have a sense of life’s fragility. You know it’s coming to an end.  But she’s also studied younger people who for other reasons are in fragile situations. For example, students in Hong Kong who were worried about Chinese rule at the end of the 20th century, and they had the same psychological profile as older people did, because the constant was fragility.

I was drawn to those comments because that is our secondary theme for today's “Good Enough” worship series “We are fragile.”  Life is fragile.  And that is not bad, it’s the truth!  And Knowing that can increase our gratitude, can inform our living- in a good enough way!  Fragility can teach us!

It is for me!  I had another wonderful, interesting, blessed, and emotional week….  After chemo on Tuesday, I flew to Oklahoma City to join Paul who had driven out last Sunday to attend his friend's funeral.  Time with the kids and grandkids is precious so why not be crazy and fly out?

I’m Never going to have this time again… and it was as wonderful as it was exhausting:  precious moments with the 3 grandkids playing were the highlights…just being with those little people was the gift.  With my kids and my friends, the Stussi’s with whom we stayed, I talked openly about not knowing how long I’d be here, that yes, I was nearing the end of my time on earth!  And like most people, they didn’t want me to talk like that.  Then A Retired pastor friend also called after he heard that I was terminal and he too had a tough time hearing me speak bluntly about my situation.  But people, I am blessed with the time to reflect….

My fragility is informing my living!  Love deeply and let most things fall that might drive you crazy fall to the ‘well in the scheme of life, not too important’ category!  That is part of the gift of this season of LENT–we think about death!  Jesus’ of course, but ours too.

Jesus knew his time on earth was very limited as he journeyed towards Jerusalem and the cross.  He knew he was going to die soon and yet what did he do?  He spent time with his friends, his disciples, the crowds, and even some of those who were out to kill him!  In today’s passage, he is dining with his siblings that are close friends of his.

He had recently traveled to Bethany after Lazarus’ sisters beckoned him to hasten and save the life of their brother.  He didn’t make it in time and so he dealt with their grief and then raised Lazarus from the dead.  So, death was, I’m sure, very much on all of their minds.  Life was precious and they were gathered with their friend and Lord.  Lazarus was seated with Jesus, Martha was serving, and Mary was once again at Jesus' feet but instead of listening to him speak, she was anointing his body, filling the space with the fragrance of death… and preparing I dare say herself more than Jesus.

I think that group and possibly all who were present were finally understanding what Jesus had been repeatedly telling them over the previous weeks—that he was going to die!  And so, they began to prepare themselves… they began to grieve.  this week I read that “grief is a whole new language that most people don’t speak well.  But It’s the language of love.  Grief only precedes love. There can be no grief where there is no love.”  So, in that home in Bethany, love was overflowing… Well maybe not from Judas and that is something else to note and consider.

But now let’s focus on Jesus- yes, he knew he had limited time—he was quite clear that he would soon die and yet he’s been healing, teaching and preaching, and spending precious time with his disciples, his followers, and the crowds.  If you read the Gospels with the insight that he’s got just a little time left so ‘what does he tell them?’, ‘what does he do?’, I think you get an important glimpse into what God thinks is important for us humans….  And in John what Jesus keeps telling them is that death will not have the final word!  That is the bookend to his continually preaching about love!

“To die is part of what it means to be human. Emory Powery wrote, “Time within a pandemic is an unfortunate daily reminder of our collective human frailty”.  But just think of our gatherings, it’s not just the pandemic! We continue weekly to share the names of people we’ve known who have died!

When I went to MD Anderson I was profoundly aware of all the cancer patients in that one location, in that one city, and just thought of the sheer volume of people who are facing their fragility and possibly their impending death!  So, death comes from cancer, heart disease, accidents, etc.  Yes, to die is human.

So, Pastor Powery posed the question: How should the dead affect the living? Because Isn’t that the purpose of Lent—to reflect on the ultimate death (Jesus’ own) and the significance of the lives, the commitments, the activities, the practices of the living? For what are we willing to sacrifice time, money, and efforts?

Do we place the struggles of people around us at the center of our attention? Does the nearness of death —for those who live on the fringes of our society, for those in our parishes who are physically near the end of their lives, for those reflecting on Jesus’s sacrifice—make us a bit more mindful of human frailty and, perhaps, encourage us to act on behalf of others?

So, don’t work so hard to get yourself up the ladder in life, don’t strive for unimportant things.  Love!  In every single way – even if that love spills out by using a costly fragrance to bless another while a critic scowls at you.  LOVE EXTRAVAGANTLY!

And never forget whatever we do in true love is never wasted.  So, love...love as lavishly as you feel moved to. Be it God or one another. Loving one another is loving God too. Whatever love you have to give is good and enough.

Because life is precious and we will die, live generously and abundantly!  Tend to that which grows and blesses others!  Don’t worry if it seems crazy to the world—it’s not crazy to God.

Let our fragility, our death inform our living!  Don’t be afraid of it because Jesus has conquered death!  We can be like Paul who pressed on despite suffering and the unknown because he did know that Christ had made him his own. That is true for us too!

We are God’s beloved precious people—fully loved as we are, today. PERIOD.  Not for who we think God is making us to be, but simply for who we are.  And that is good enough.  We are going to die so let us embrace the life we have, the gifts we have, the love we can share, and let go of all that holds us back.  That would make our God ecstatic I dare say! 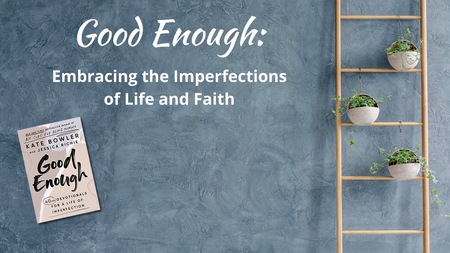