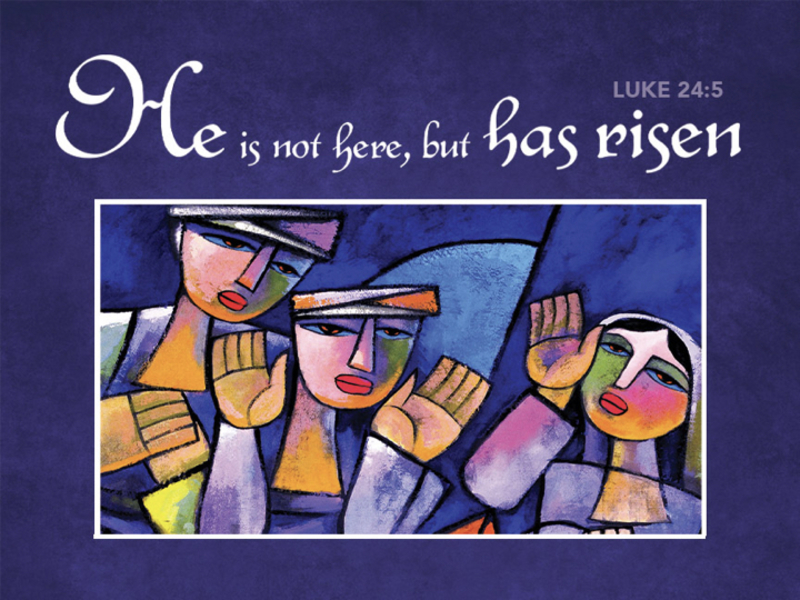 What a wonderful day to gather and celebrate life!  Life in Christ and life in the community of faith.  And are we not grateful that we are celebrating on this side of the resurrection story?  We KNOW the ending but can you imagine being a disciple on that very first Easter day?

Most likely you have fused all of the Gospel accounts into one story of Jesus’ last days but each one has its unique details and this year, we are looking at one particular story—Luke’s.

It was the first day of the week in the dark of the new day, and the women were headed to the tomb to anoint the dead body of their savior and friend.  They were traumatized, devastated, and overwhelmed by grief because Jesus had been murdered and his body placed in a burial cave and a large stone rolled across the entryway.

Even so, as early as they could get out, they dressed, grabbed their supplies, and left.  Can you imagine being part of that group?  Meeting before dawn so together they could go and care for their Lord’s body.

I imagine the shock was still overwhelming…. How could this have happened?!  I’m not sure how they planned to roll away the great stone but once they arrived, they got another shocker:  the stone was NOT blocking the entry into the tomb AND Jesus' body was nowhere to be found!

No wonder they were perplexed!  I bet they had all kinds of crazy thoughts like “Who stole his body?”  I imagine their bodies were reacting in visceral ways--- don’t you feel sick when you have lost something really important and you’re running around the house searching for it?  The pit in your stomach or the anxiety in your bones is awful.  Well, imagine that feeling magnified!  It makes no sense but they can’t find Jesus’ body!

Then suddenly they have another other-worldly experience!  Two glowing men, who we learn later in verse 23 are angels, suddenly are standing right beside them!

Those women hit the deck-petrified and hear “Why do you look for the living among the dead?  He is NOT here, he has risen.”  I’m not surprised none of them said, “Well, Praise God!” or “I knew it!”  Dead bodies stay dead—that they knew.  No one believes at first.

But these angels tell them to remember… and they do!  That too is pretty amazing:  Stress tends to block from our memory anything but the most immediate crisis and they were in a crisis but yet, they do remember!

They traveled back to the group of believers and tell all this to the 11 disciples and the others who, like them, had followed, been taught by, and loved Jesus.

And I wonder what they told them.  I’m always intrigued by the phrase “all this.”

All what?  What did they say? just the facts?  Of the empty tomb?  They didn’t see Jesus but maybe when they recalled the words of Jesus, suddenly, like the men on the road to Emmaus who had the scriptures opened up and understood them, they UNDERSTOOD!

I wonder, did they proclaim how all the words of Jesus fulfilled the scriptures, the prophesies?  Did they reveal to the others the meaning of all the teachings of Jesus…?  Or did they just say “he told us!  Remember?

And none of us believed him but it’s true!  He’s Alive!”  I wonder… but whatever “all this” was, they shared it!  They proclaimed it!  They believed and were not silent!

Now imagine you were one of the 11 or in the large group of believers who were present when the story was told…. You too have been in utter disbelief that Jesus was tried, beaten, crucified…

It can’t be but Jesus was DEAD!  But these women are telling you that they encountered angels who said that Jesus was not in the tomb because he has been raised!  What would your reaction be?

They thought it was an idle tale!  They didn’t believe the women!  We’re not told what they did but after receiving the incredible proclamation, I am guessing they did nothing, at first at least.

But according to Luke, one person couldn’t stay put.  Peter had to see for himself and guess what?  The women were right.  Jesus was not there, only the linen cloth used to wrap him remained and so Peter returned to where they were staying, amazed!

I like Luke’s version because, like us, they didn’t see the Resurrected Jesus that morning.  Unlike in John, where the gardener (Jesus) talks to Mary Magdalene, there is no body here, we don’t have a resurrection appearance YET.  They have to decide if they believe based on what they have remembered and what they experience!

Luke’s version also gives us three different responses to the incredible news that HE HAS been raised, that he is ALIVE!  Proclamation, disbelief, and silent confirmation.

Now I know that these were the initial responses and you and I would not be here if the incredible impossible truth that Jesus was alive was not believed and shared by many but I wonder where would we have fallen if we were present that day?

Would we remember and tell “all this” or would we scoff, believing it an idle tale, or would we need our own confirmation?

I ask that because the reactions to the news are still received that way is it not?  And to be honest, I understand why.  It is unbelievable news!  Jesus is NOT DEAD!  He is alive! How is that possible?  It’s not if we understand how things work in this world right?…  But God’s ways are NOT our ways.  If the dead don’t stay dead, what can you count on?

You can count on God.  If we, in faith, believe that the resurrection did happen, what possibilities does that open up for us?

Well, how about that Death does not have the final word?  That we can expect to see again those we’ve loved and lost.

Yes, Luke tells us that people reacted to the news that Jesus was raised to life in different ways and that resurrection faith came slowly to most of the disciples. But when it came it changed everything.  And it still does!

Easter is the most hopeful day in the Christian year -– a day we celebrate Christ’s resurrection and the incomparable news that death never has the last word! Not for Jesus. Not for us. God’s word endures. God’s light keeps shining. God’s love triumphs. Alleluia!