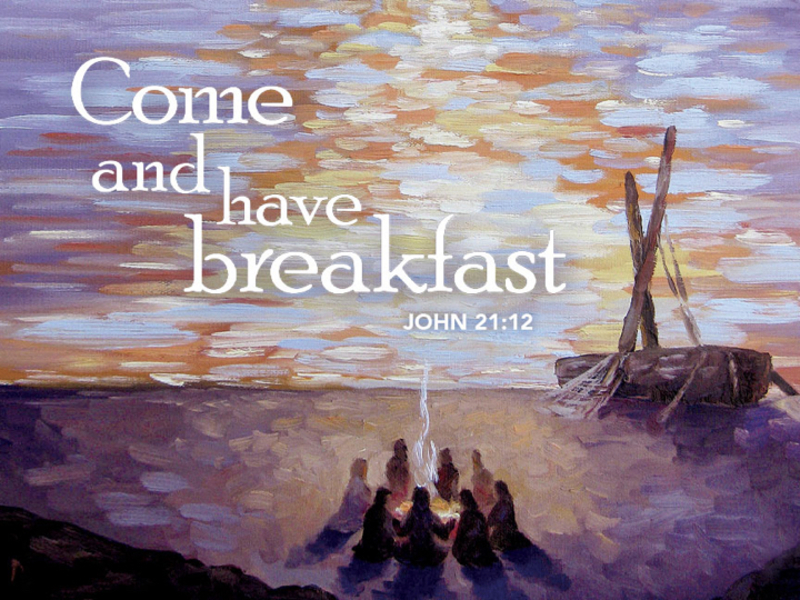 Grace to you and peace from him who is and who was and who is to come.  Amen.

Last week we heard about Jesus appearing to the disciples without and then with Thomas and John said that these things had been written so that we may come to believe that Jesus is Lord.  I think todays story from John is also told so that we may have a story for OUR lives of faith — a story to encourage us!

I read a commentary in the Christian Century by Kiki Barnes this week that really stuck with me.  Why?  Because it was a way to look at today’s Gospel text in a way that I hadn’t thought of before.  She suggested that today’s readings from Acts and John can be considered a call story and a CALLED BACK story.

Our passages from Acts and John are full of such rich details that, I think, can help us really picture these encounters with Jesus.  Let’s start with Acts:  The story of Paul’s shazam moment on the road to Damascus is quite spectacular and absolutely can be considered his call story.  After being stopped from gathering and persecuting the men and women who were followers of Jesus BY JESUS, he, much to everyone’s shock began proclaiming Jesus in the synagogues! He was called, chosen to bring “my name before Gentiles and kings and before the people of Israel” says our text.    So his is definitely a CALL STORY but our Gospel reading in John 21 reflects something a little different: it can be considered a callback story. Have you ever heard of a callback story?  I hadn’t but Pastor Barnes wrote that Often Jesus must call us back to the mission field and here in this passage, I can totally see how the 7 disciples, and especially Peter, needed to be called back.

Remember the disciples have already seen the resurrected Jesus, not once, but twice... and yet, they are still grieving and agitated; they don’t know what to do. And so, in their agitation and uncertainty, they go back to what they know — fishing —the life they knew before Jesus called them to follow him and changed their lives forever.

So there they were, fishing, and as we hear, they didn’t do so well but then Jesus shows up and again Jesus reveals to us the God who, in John’s words at the very beginning of this gospel, showers his beloved children with “grace upon grace,” with more than enough of what they need.

So when they follow the instructions of the man on the shore and when the catch is SO abundant, they realize the man on shore is Jesus, and they waste no time getting to him. He calls them by the fire, where he has cooked fish and prepared bread. He gives them food that nourishes their bodies and heals their souls.

In spite of their abundant catch, the disciples discover that Jesus doesn’t need what they bring — he has already prepared a meal for them which is more than enough.

Nevertheless, he invites them to bring what they have caught, to contribute some of their fish to the meal they will share.

It is as if Jesus is reminding them that, in the midst of their shock and confusion and grief, they can still do something.

Notice that Jesus is not done.  The summons to try again isn’t just for the fish in the sea.

Jesus has met them where they are and given them what they needed, and invited them to contribute what they can AND return to the calling that they had received.  Despite all that seems to have changed, Jesus reminds them that they still are called.  They still are needed!  Even if they had abandoned Jesus, he showed up gracing them with peace and a commissioning.  Even if they had gone back to what they had done BEFORE, he showed up and invited them back!  They encounter the Jesus who loves them back into the ministry they have been invited, called, to participate in.

We are not all that different are we?  We have mountain top experiences with the Lord, we are on fire, we are passionate about our calling but then something happens that derails our follow through.  We might have felt the prompting of the Holy Spirit to engage the world in some specific way, even begun to do the work, and then life comes at us fast. And maybe you’ve stepped away from what you felt called to and went back to what you knew from before….  Maybe you went back to “fishing.” But Jesus shows up on our shores too.  Calling us back, loving us despite our failings, feeding us abundantly and inviting us to contribute, and sending us out to share in the ministry that God is up to in this world!

In the verses that follow the haul of fish, we can get lost in the meaning of the words Jesus is using for love, or the question of whether Peter is vexed at Jesus’ continued querying. But at the heart of the text, Jesus is showing up to re-engage Peter in the work of spreading the gospel message.

Jesus still needs Peter, and so does the church that is to be formed. The upper room of Acts, where a remnant will be gathered in one accord, needs Peter to be there, to lead the charge, to use his brazenness to proclaim that no, we are not drunk. Jesus shows up and recalls Peter to the work to which he was originally called, to be that rock upon which a church is built.  He doesn’t chew him out for leaving the city and going back to the water, to fishing, but he doesn’t let him stay there does he?  Jesus meets Peter and the others where they are at and invites them BACK — to share the message of God and his love!

God’s work still needs us, too, and being ourselves has not disqualified us from the mission. Answering the call to represent Christ in the world can be quite daunting, but even if we walk away or simply take a break because like the disciples we are agitated and confused, Christ calling us back to the job is a true work of love, grace, and restoration. After the resurrection, Jesus models the important concept of retention over recruitment. He doubles back to visit those who have given up, encouraging them back to the fold.

Their actions, our actions may confound us, but God is not deterred. Peter is forgiven and restored to move forward in his call to make disciples by pointing to that same Source of grace. The passage reminds us that grace is not for a moment, but for our lives. Conversion does not occur in an instant. We are continually re-invited to show up for Christ, just as we are. And that is why I am so grateful this story is in our scriptures—we need it for our lives of faith!