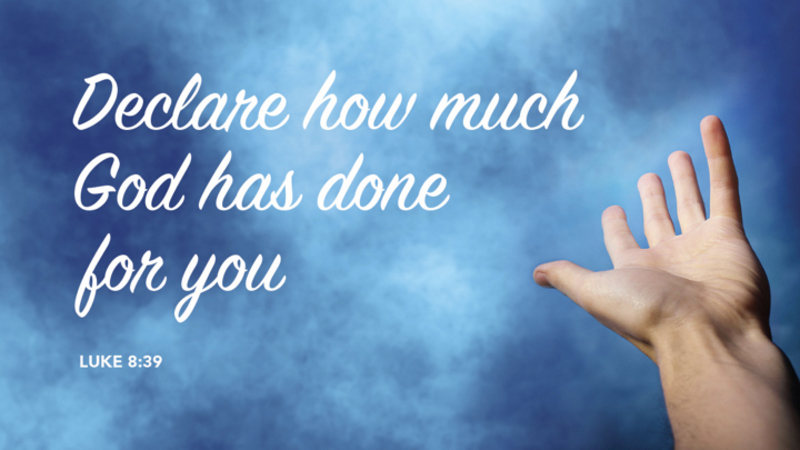 May the words of my mouth and the meditations of all of our hearts be worthy in your sight O Lord, Amen.

When Julie first approached me regarding preaching on either June 12 or June 19, I of course had to find out what the lectionary topics were.  When I found out that the topics were the Trinity or Sin, I figured I would be better off picking Sin considering I felt I knew a whole lot more about that than the Trinity!

In looking at the scripture passages, however, I saw more of the Good News of Jesus Christ than I did about sin.  In our Isaiah passage, God holds his hand out to the sinners stating that” I was ready to be sought out by those who did not ask, to be found by those who did not seek me.   I said, “Here I am, here I am,” to a nation that did not call on my name. I held out my hands all day long to rebellious people, who walk in a way that is not good, following their own devices…” That isn’t a fire and brimstone message, that is a passage demonstrating God’s love for all of us sinners.

And remember our passage from the Psalms.  We are reminded that “All the ends of the earth shall remember and turn to the Lord; all the families of nations shall bow before God. For dominion belongs to the Lord, who rules over the nations”. In the end, God will overcome! That is indeed Good News!

Our passage in Luke places Jesus in the country of the Gerasenes.  This region is located east of the Jordan River and southeast of the Sea of Galilee.  The country of the Gerasenes is one of the few areas Jesus visited where Gentiles (i.e., non-Jews) composed the majority of the population. Interestingly, the name Gerasenes means “Reward at the end”.  And there is indeed a reward at the end of today’s gospel.

When Jesus gets to the country of the Gerasenes, he encounters a man who was suffering from demonic possession.  This man had been isolated from his family, homeless, naked.   He had suffered for a long, long time at the hand of these demons.

There are many scriptures where Jesus and his disciples healed people who were possessed by demons, blind, deaf, crippled, epileptic, or physically or mentally ill.  There is some debate about whether those referred to as possessed were actually inhabited by demons or if they were just mentally ill. Are the people in the Bible referred to as demon-possessed really just mentally ill?  I just don’t know. However, when watching the news about massacres and mass shootings by individuals who deliberately schemed to mow down innocent victims with automatic weapons, I can envision demonic possession. I just can’t imagine that level of evil without Satan’s involvement.

Going back to our gospel story, the demons had taken away this man’s dignity. He wore no clothes.  Luke likely mentions his nudity to speak about the indignity this man experienced. Adam and Eve experienced the shame of nudity in the Garden. Isaiah prophesied naked for three years to speak of the shame that would befall Egypt in Isaiah 20.  This man of Gerasenes had no dignity – the demons had taken it all.

The demons had also completely overtaken this man’s life. We don’t know if this man was a danger to himself or others, but the community thought so.  They had intervened and attempted to bind him.  However, he would break the bonds and be driven by the demons into the wilds.

The man says that his name is “Legion,” because many demons had entered him. A legion of Roman soldiers consisted of approximately 6,000 men so I am guessing the idea is that there were a great number of demons inside of him.

And this man was not living in a home, he was living, not just “on the streets” but lived amongst the tombs.  I have had many conversations with Pastor Clay, our community’s pastor for the homeless population.  Clay will tell you straight out that if an individual wasn’t already mentally ill before they became homeless, they certainly would be after living on the streets for a while.  The paranoia, the fear of assault or theft, temperature extremes, the self-medication, depression, self-loathing, and self-punishment - all those issues could make those impacted by homelessness ill even if they weren’t before.  Can you even imagine living among the tombs of the dead?

I am sure that if you met this sad case of a man on the streets, you would have been tempted to avoid any sort of contact with him.  He is naked and dirty and no doubt appeared dangerous.

But what does Jesus do?  He approached him and the demons begged Jesus not to torment them. This is common in Scripture because the demons recognized Jesus’ ability to cast them out.  Just like he did in this case. Jesus commanded the unclean spirits to come out of the man – He is going to give this man his dignity back.

The people flee and told others what had happened and then a great crowd comes back no doubt curious as to what may happen next. Notice how they find the formerly possessed man: He is sitting at Jesus’ feet, clothed and in his right mind. That’s a big change from how they’ve seen him in the past. Notice that the man is sitting at Jesus’ feet, the position of a disciple. This man has fully become a disciple of Jesus, that “reward at the end” I mentioned earlier.

The new disciple begged that He might go with Jesus.  However, Jesus does not allow him to go.  Luke doesn’t tell us why.  It could be that the man was fearful of the demons returning and that is why he wanted to cling to Jesus just in case.  Or, it could be that Jesus, in His wisdom, realized that that man would make a better witness in his city.  Jesus did have a role for him, however. He told him to “Return to your own house and tell what great things God has done for you.”

Let me tell you about two men that just couldn’t keep their mouths shut, which greatly impacted my life.  Back in the late 1990s, I was a single mom rearing two sons.  Although I had been raised in the Church by my parents, I had long strayed away. I was “following my own devices” just like the people in our Isaiah passage.  My mom and dad came to visit me in my modest home in Dayton, Texas.  My father flat out asked me what I was doing about raising my boys in the Church, stating “That is your job as a parent and nobody else could do it for you.”

Ouch, that stung a bit, but still, I hesitated.  Sundays were my only day off from work and I felt I needed that time.  In addition, some of my past Church experiences were less than positive and that left me a bit scared and a little leery.

Then, less than a week later, I took my son Aaron to karate practice.  I had noticed a big change over the past few weeks in the attitude and demeanor of the karate instructor, J.R.  He was just happier, kinder, and more approachable.  I asked his wife, Sissy, who was a co-instructor, “what is going on with J.R.  He just seems different.”   She just smiled big and said that J.R. had “found Jesus”.  They both talked to me after practice, begging me to attend the little church they had joined.  Wow!  Two big pushes in less than a week, one from my dad, the other from an associate that just seemed happier.  I did attend that little church with them next Sunday and have not strayed since.  Two people that refused to keep quiet got me back into Church and back on God’s path.  I am quite sure the Holy Spirit played a pretty big part in orchestrating that effort!

Going back to our Bible story, perhaps Jesus knew that this man, whether formerly insane or demon-possessed, could now stand proudly, with his dignity restored, in front of his community.  He could tell everyone what Jesus has done for him and that would bring more souls to the Lord than anything the man could have ever contributed as a disciple!

What has God done in your life?  How has God changed your life?  What sins or demons did you have once that you no longer have to carry thanks to his love?  If you haven’t done it in a while, take some time to think about it.  Have you shared that Good News with anyone?  How about lately?  People are not usually drawn to the Lord from a scripture verse or a well-delivered sermon or a fantastic podcast.  People are drawn to the Lord by other people who share their good news and demonstrate changed lives.  Our Galatians passage states, "As many of you as were baptized into Christ have clothed yourselves with Christ.”  Let that image shine!  Amen!