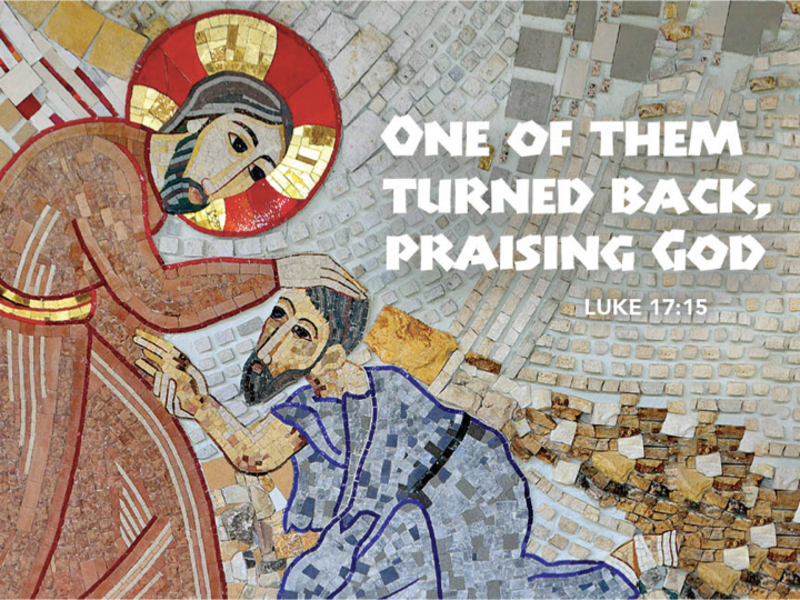 Lord may the words of my mouth and the meditations of all of our hearts, be appropriate in your sight, AMEN.

Our texts today are filled with all kinds of great messages to take to heart.  First of all, we have Naaman, commander of the army of the king of Aram in 2 Kings 5.  He was a great man and highly favored by his master because the Lord had given him great success in battle.  He just had a couple of flaws.  One, he was suffering from leprosy.  Second, he was also suffering from great pride.

He almost blew the chance for healing because of his pride.  Fortunately, his servants had better judgment and encouraged him to do what the prophet commanded.  The Jordan River became the fountain of youth, and he was healed of his leprosy and his pride.

Our Psalms 111 passage tells us about God whose deeds are marked by majesty and splendor and whose righteousness endures forever. He causes his wonders to be remembered and he is gracious and full of compassion.  This speaks to the very nature of God.

2 Timothy 2 gives us some excellent advice.  “warn them before God that they are to avoid wrangling over words, which does no good but only ruins those who are listening.”  Very well put Paul, maybe we can discuss this at another time.

Our gospel message is not simply a healing message nor is it just about the one leper of 10 who came back, demonstrated his gratitude, and praised Jesus for his healing.

Yes, there is a lot of great stuff here, so many lessons and so little time to preach (and no, you don’t need to say Amen to that)!

However, I will stick to the gospel message.  From our scripture, Jesus was approached, albeit from a distance, by a group of 10 persons who were affected by leprosy, or Hansen’s disease as is politically correct to call it today.  According to law at that time, anyone with a leprous disease was required to live “outside the camp” and cry out “Unclean, unclean” whenever anyone approached them.  If they were fortunate enough to recover, a priest had to certify that the person was cured, and they had to undergo certain purification rites before he or she could return to the community.

Because of the many times we have heard the story of the Good Samaritan, you probably cannot even hear the term Samaritan without thinking of the word “good”.  But not so for the original hears of this message.  The original listeners of this message were no doubt surprised that this foreigner, this Samaritan, ended up being the model of faith in this parable. The fact that there was a Samaritan in the mix with these other 9 individuals with Hansen’s disease, was interesting.  Traditionally, the Jews and the Samaritans despised each other.  The Jews considered them detestable.  In fact, rather than traveling through Samaria, they would go by a longer route to avoid it and any contact with the Samaritans altogether.

I find the human tensions in this parable interesting.  Samaritans were despised by the Jews and lepers were despised by everyone.  They were contagious and ceremonially unclean.  Anyone who had contact with them would not be able to worship in the temple without undergoing purification rites. They were societal underdogs.

Speaking of dogs, we have 4 dogs that reside in our household now that we have merged with my parents.  John and I are the proud parents of an aging yellow lab mix named Sunshine.  She is the Queen Beast of our household; she rules the roost. Then, I have a paranoid, flakey whippet hound mix named Brandy who loves to curl up with me for naps and, because she is all legs, will shamelessly steal food off the kitchen counter.  True confession, she is my favorite.

Then, we have a pair of sisters, mom’s dogs, chihuahua, and terrier mix, about a year and a half old.  I call them the yappers because they are small and yappy.  Their names are GiGi and Gina.

Despite the age and size differences, GiGi has established herself as 2nd in command of the four-dog pack. Early on, she realized that hooking up with the big girl Sunshine gave her some street cred.   Brandy falls in rank as third.  Then there is poor little Gina, a small, sweet, sensitive little creature.  Look at her funny and she will pee on the floor.  She is the odd dog out.  She is the first one to cower in fear, get picked on, or go without a treat because someone steals it from her.  She is the bottom of the pack.

I am sure that in this pack of lepers, our 10th leper, the Samaritan, might have felt a lot like Gina.  One Samaritan in a pack of Jews, despised by the Jews for being Samaritan but the whole pack of them was detested by society because they had a disease that they could not control.

Think about all the Gina’s in our society.  Those who live in the liminal spaces at the edges of their society, suffering from afflictions of body, mind, or spirit.  They may be physically exiled like the men with Hansen’s disease, or they may continually experience rejection and alienation that gradually erodes their very souls.  They call out from a distance for help but are more often unheard and unseen.

The beauty of this parable is that Jesus does hear them and sees them!  In the NIV version of the Bible, Luke identifies the ten, not as lepers, but as “men who had leprosy” just as he referred to the man who was paralyzed not as paralytic but as “a man who was paralyzed” and he identified the demonic as “a man who had demons”.  Luke points out first their humanity, not the disease or the symptom that brought them to Jesus. He saw the person through Jesus’ eyes, as we should see Gina’s in today’s society.  Not just as the drug addict, alcoholic, or homeless, mentally ill, handicapped, or elderly.  We should see the human beloved by God and make in his image.

For these 10 sufferers, Jesus hears them, sees them, and heals them.  And he tells them to go show themselves to the priest so that they can be declared clean.

Most of you were raised in a setting where learning manners was important.  I was raised in the South and they double down on making sure children know their manners.  I was always taught that a person with good breeding was polite.  Yes, mam, no mam, yes sir, no sir, please, and thank you.  When I took a job in upstate New York for a big environmental project, I was informed by my coworker Sarah that I needed to shush up my yes mams and no mams because I was shaming them into politeness they just couldn’t deal with!

I wonder about our Samaritan.  Was he just raised right?  He was the only one who, upon realizing that he was healed, returned to Jesus, to thank him.  He praised God in a loud voice and prostrated himself at Jesus’ feet.  “What about the others,” Jesus asked?  “Were not 10 made well?”

We shouldn’t think too negatively about the other nine.  All were faithful enough to go on their way to the priests, even though at that point, there had not been any dramatic or definite healing.  All ten started on the journey.  Did the others not notice they were healed?  Or did they perceive that they were healed but continued on the priests so that they could fulfill the law?  Perhaps the others had more to gain by proceeding directly to  the priests.  Their goal may have been to be declared clean so that they could engage in their purification rites and rejoin their community.  Perhaps they were so filled with excitement about seeing their family and friends again that didn’t feel that they could or should stop and go back.

However, the Samaritan’s status as an outsider allowed him to see his healing differently than the others.  He didn’t just have an improvement in circumstances.  Instead, he had experienced a miracle from God, to which the only possible response was praise.  He turned back to Jesus in gratitude and thanksgiving.

People living on the margins of society see things differently than those in the center.  They may be less interested in the status quo and more open to change.

I read an interesting metaphor.  Think about the ten lepers at the bottom of a pit with a ladder.  For nine of them, climbing the ladder offered them a way back into polite society.  Healing was necessary to reach the place on the ladder they wanted.  The Samaritan, however, never got to climb the ladder because of his status as a foreigner.  No amount of climbing was going to make him less of an outsider.  Instead, he saw the miracle that was manifested in himself.  He saw something the others did not.  Jesus is healing people, look at what the Lord has done!

So, he returns to offer his gratitude, to say thank you, Sir, thank you, Master.  Perhaps the others returned later, we do not know.  But we know that the one that returned got even more than the miracle of physical healing.

Jesus said words to him words of spiritual healing: “Get up and go on your way; your faith has made you well.”  He received healing that went beyond skin deep.  He received the true healing nature of God, the LOVE of the Father through Jesus Christ.

This Love by the Creator for the Created reaches beyond the boundaries of clean and unclean, healthy and unhealthy, sexual preferences, affluence level, political affiliation, and racial class, even beyond Jews and Samaritans.  God’s LOVE is what made him truly well just as it does for us today.  AMEN!